Chef Scott Hall wants more than hungry people showing up at his new Bone-In Barbeque restaurant, right next door to Spirit Communications Park in the BullStreet District. He wants their advice.

And he’s not just blowing smoke.

Instead of a formal grand opening of the BullStreet District’s first restaurant, Chef Hall plans a low-and-slow approach, as they say in the barbeque business: just open the doors, feed the customers and get their feedback on what they tasted, saw and felt.

“We’re all part of building the BullStreet District, so come on in and help me guide its first restaurant to a first inning home run,” Hall said.

The premier barbeque and Southern eclectic dining experience in Columbia, S.C., Bone-In Barbeque is located in the historic Ensor Building, adjacent to the entry plaza of Spirit Communications Park, home of the Columbia Fireflies Minor League Baseball team. The casual-dining restaurant features roll-up garage doors and a large outdoor patio where guests can meet up for a local beer, frosé or craft cocktail before and after games.

Chef Hall, whose barbeque skills have been featured in GQ and Smithsonian magazines as well as the Cooking Channel, Bravo and Travel channels, will request feedback from diners. 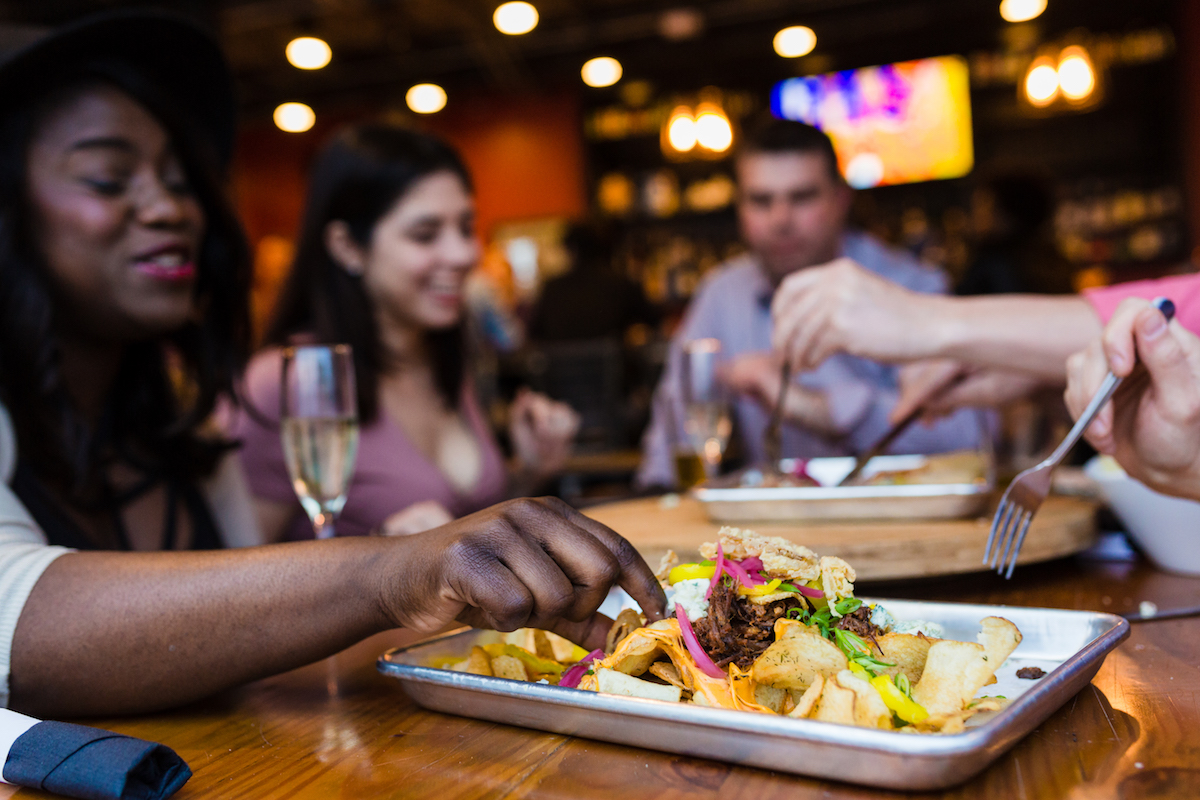 “Every person who walks through our doors will be a barbeque expert, because this is South Carolina, and everyone has an opinion,” Hall said. “So we’re going to have fun with it. The BullStreet District is a new frontier, and want our guests to be involved in a first-of-its-kind adventure here at its first restaurant.” 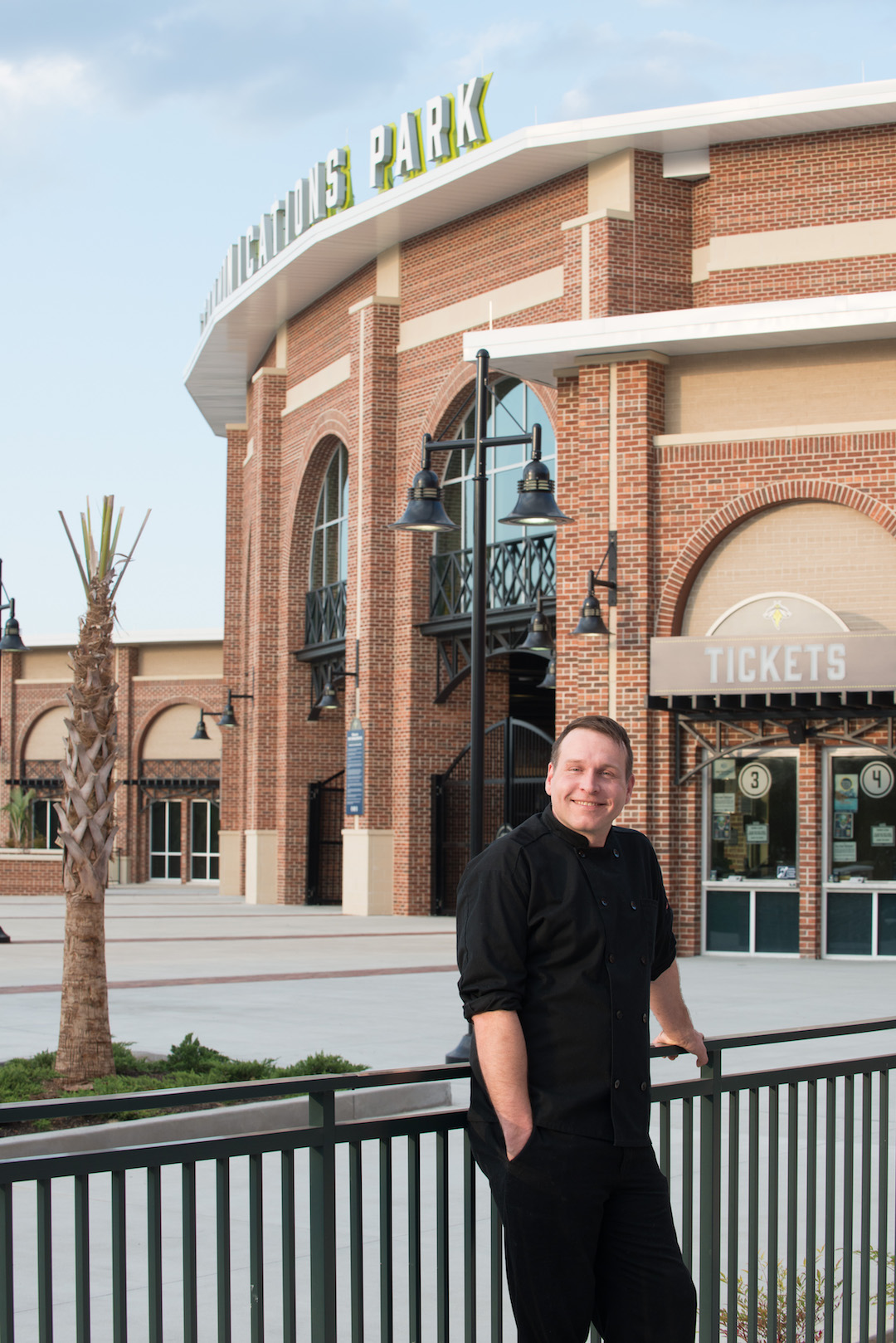 Grand opening hoopla can come later, he says, after early guests have had a chance to give him their feedback.

“This is more than just a new restaurant in our city,” said Columbia Mayor Steve Benjamin. “Bone-In Barbeque expanding from a food truck to a brick-and-mortar location is a sign that our creative class is flourishing. It aligns with the vision of the BullStreet District, because Chef Scott Hall’s work is at the forefront of the food scene here, just as BullStreet is on the cutting edge of modern development. It’s the perfect first restaurant for Columbia’s newest downtown neighborhood.” 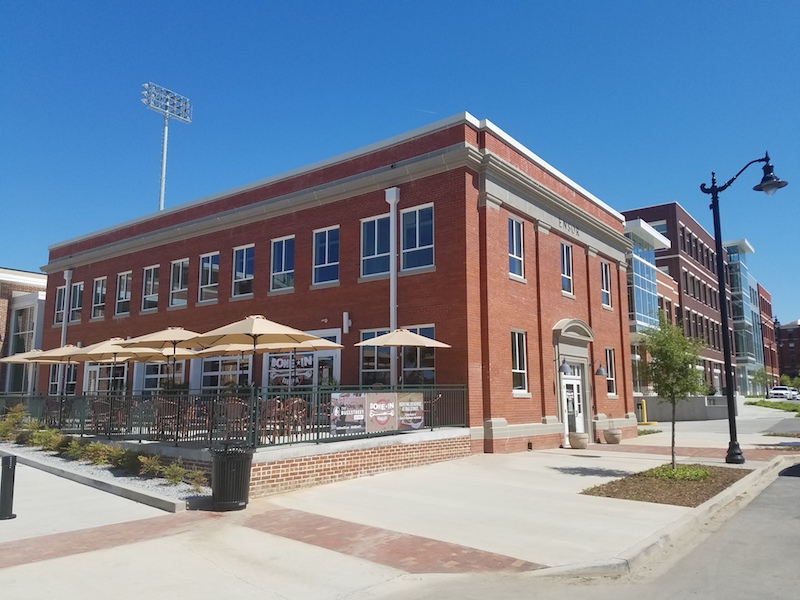 Dinner and Lunch Are On

To start, the restaurant was open for dinner Tues. through Sat. from 4:00 p.m. to 9:00 p.m., with happy hour from 4:00 p.m. to 7:00 p.m. Lunch is served Tues. through Fri. 11:30 a.m. to 2:00 p.m. Additional hours will vary, for example if Hall decides to open the doors for a Sunday or Monday baseball game or for a holiday such as Mother’s Day; guests can check Bone-In Barbeque’s Facebook page for updates. Catering and bulk pick-up orders are available now.

At 3,600 square feet, the casual dining restaurant features a sizable bar, complete with purse hooks and USB ports, handmade from rubber wood by Hall and his father Steven. Roll-up glass garage doors open onto a spacious outdoor patio that extends out on the ballpark plaza, with charming European-style café chairs and umbrellas to seat more than 40 outside. For the 77-seat interior, Hall and his father repurposed oyster tables by building circular “lazy Susan” inserts, making sharing even easier for small and large parties. A private dining room is ready to accommodate 15-30 guests for intimate group dinners, receptions and business meetings. 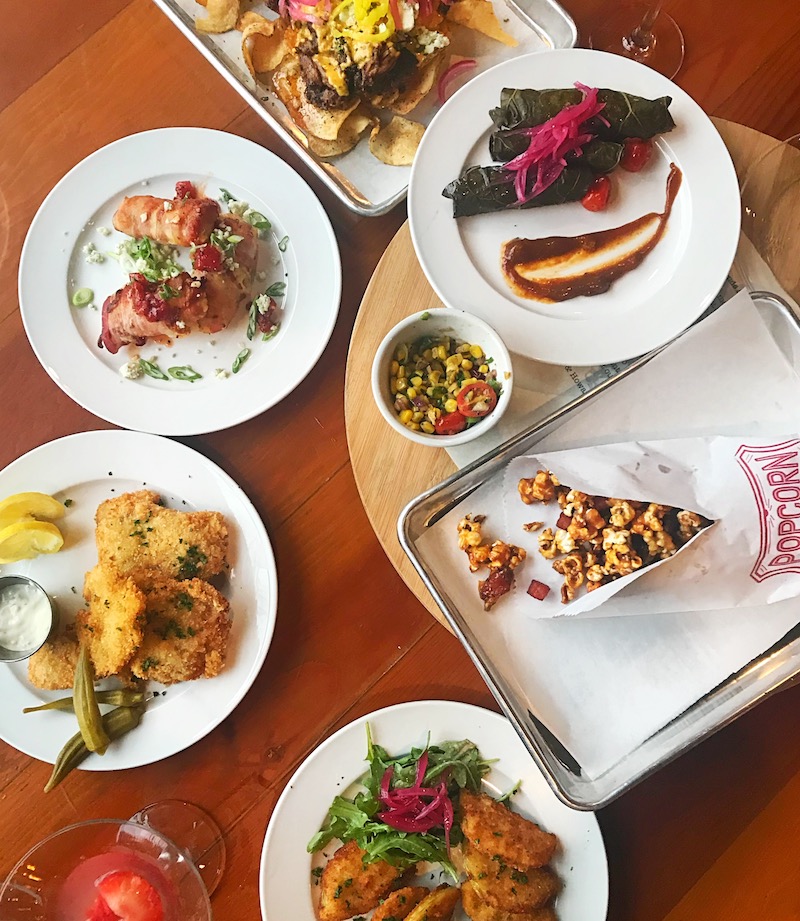 A Chef and Team with Serious Chops

Hall has since sold the food truck to focus on his brick and mortar business at BullStreet; catering operations have moved to Bone-In Barbeque’s spacious, brand-new kitchen, which features a massive smoker out back.

A Menu that Goes Beyond the Meat-and-Three 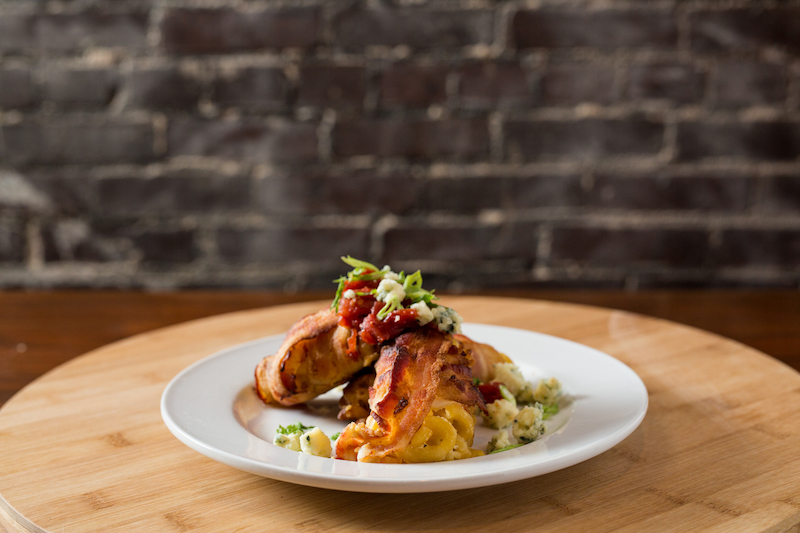 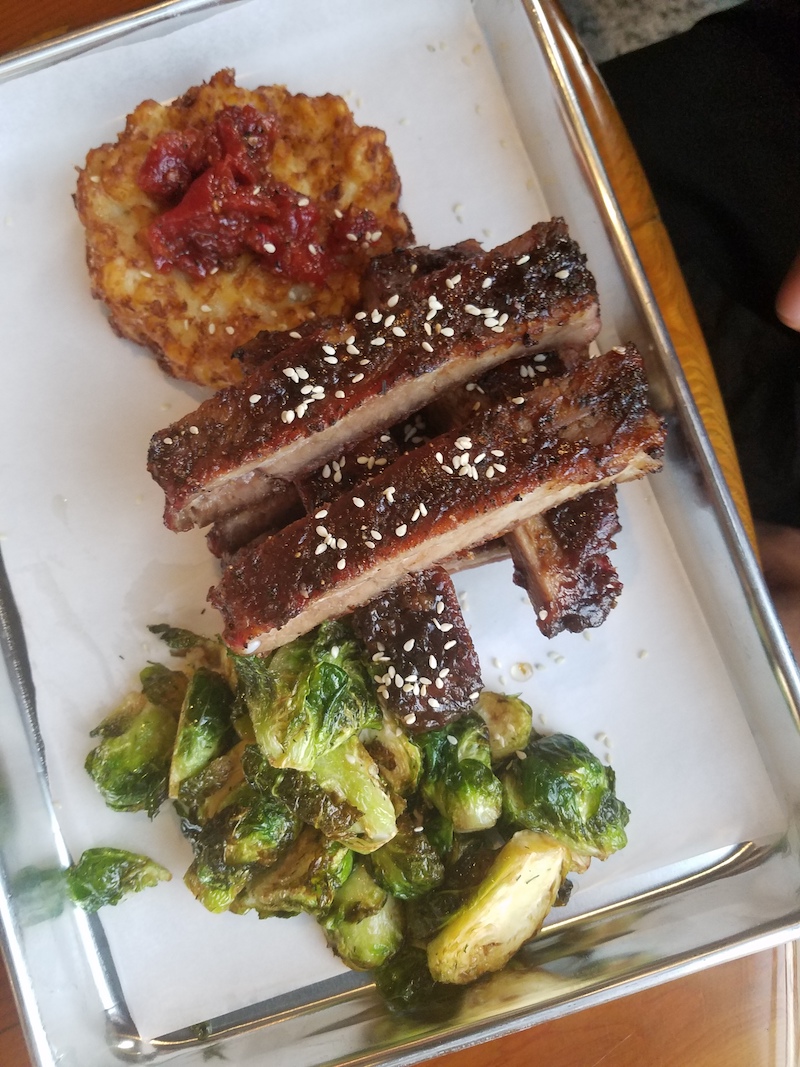 The bar offers a formidable classic cocktail program – a departure from the characteristic Southern BBQ restaurant – focused on classic, Prohibition-era cocktails such as the Aviation, Martini and Negroni, made with leading-edge spirits such as Hat Trick gin by Charleston’s Hi-Wire Distillery. Two frozen cocktails are on tap as well, including a frozen rosé (known as frozé or frosé, depending on your preference) with fresh strawberries, and a Frozen Firefly, a refreshing take on the classic Grasshopper cocktail – and an homage to the Columbia Fireflies. Hogwash rosé will be served on tap, and craft beers will be available from local breweries such as River Rat and the nearby Cottontown Brewlab. 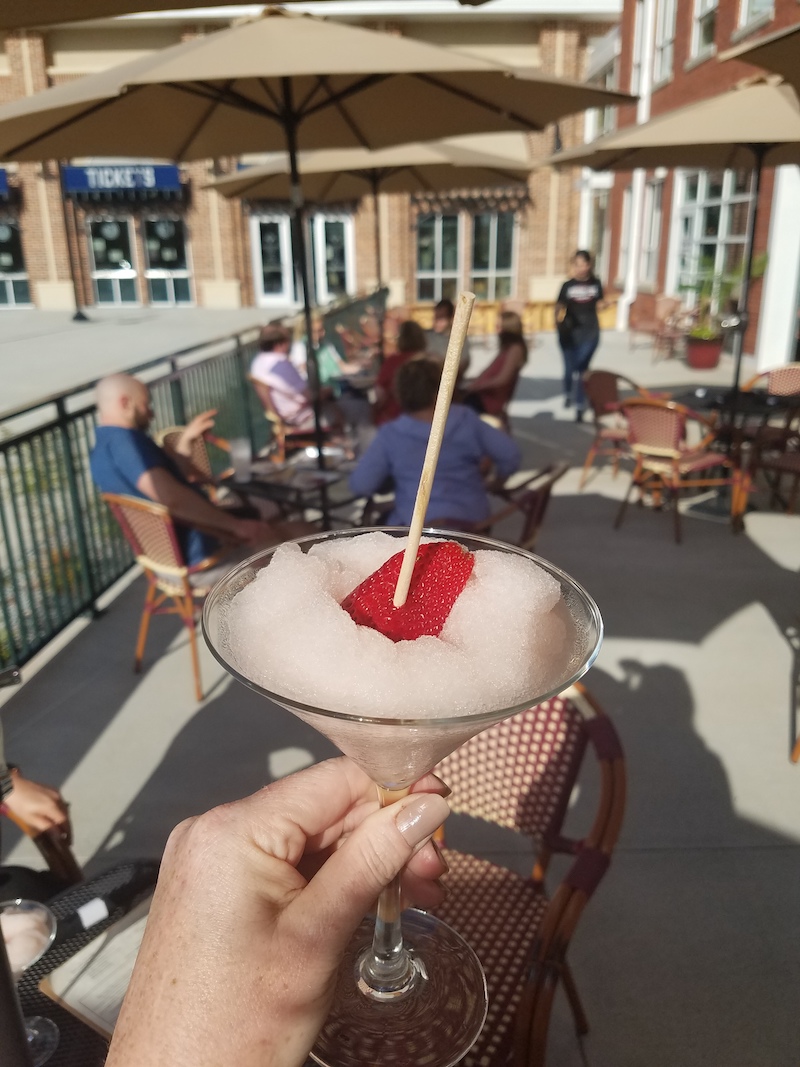 Frosé — light, dry and frosty frozen rosé — is a top seller from the full bar at Bone-In Barbeque.

“Our vision for BullStreet incorporates a mix of local, regional and national businesses, and getting the local part right is extremely important to us,” says Robert Hughes, president of Hughes Development Corporation and master developer of the BullStreet District. “With Bone-In Barbeque, Scott Hall has created a local, chef-driven destination where a wide range of patrons can enjoy a casual, fun experience right next to the stadium. We’re very proud that the first restaurant at BullStreet is a place that so accurately reflects the creativity and authenticity of downtown Columbia.”

Come as You Are, from T-Shirts to Tuxes

Bone-In Barbeque will accept reservations for large parties, but Hall expects most business to be walk-in. Dress is casual, but guests are encouraged to come as they are. Already, the restaurant has seen guests dressed in everything from floor-length gowns and tuxes (pre-gaming for a gala) to shorts and T-shirts (walkers from neighboring Elmwood Park). 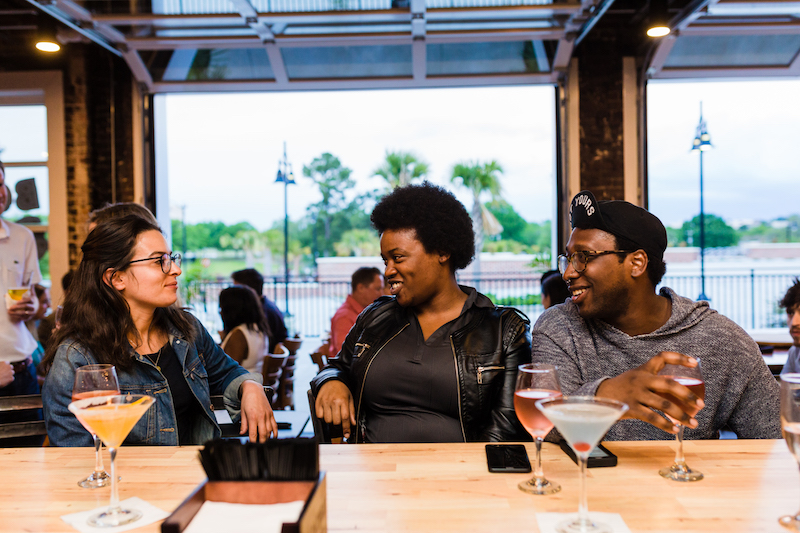 The cocktail bar was made by hand by Hall and his father [photo: Forrest Clonts Studio]

How to Get to Bone-In Barbeque at BullStreet

While construction continues on the 20-acre public park and other projects at BullStreet, the best directions to get to Bone-In Barbeque are to enter the BullStreet District at Calhoun and Barnwell, turn left on Saunders St. and right on Boyce St. Guests also can take Bull St. to Freed Drive, curve up to the stadium entrance plaza, and veer right onto Boyce St.

Bone-In Barbeque is located at 2180 Boyce Street, Columbia, SC 29201. The phone number for the restaurant, catering and pick-up BBQ orders is 803-728-7512. The general inquiry email address is info@boneinbarbeque.com.

Bone-In Barbeque is the premier barbeque and Southern eclectic dining experience in Columbia, S.C. Located in downtown Columbia, S.C., next door to Spirit Communications Park in the BullStreet District – home to the Columbia Fireflies Minor League Baseball team – Bone-In Barbeque is not your standard meat-and-three BBQ joint. Bone-In Barbeque is independently owned by Chef Scott Hall, a Midlands native who practiced in many New York City kitchens and has appeared on the Cooking Channel, Bravo, Travel Channel and in GQ and Smithsonian magazines. The restaurant offers a casual menu of scratch-made recipes focused on high-quality ingredients and conscientious cooking techniques, with a formidable cocktail program, craft beers, frosé on tap, house-baked breads, and housemade pickles and desserts at a remarkably accessible price point in a relaxed, welcoming environment. For more information, visit http://www.boneinbarbeque.com and follow @BoneInBBQSC on Facebook, Instagram and Twitter. #BoneInBBQSC

The BullStreet District is a 20-year, 181-acre project to transform the historic S.C. State Hospital site into a vibrant, mixed-use neighborhood district in downtown Columbia, S.C. The state’s first urban gigabit community, BullStreet is home to the award-winning Spirit Communications Park, where the Columbia Fireflies Minor League Baseball team has hosted more than 860,000 guests since launching in April 2016. Connected to the ballpark, the First Base Building is the largest private office building constructed in Columbia, S.C. since 2009 and is home to Ogletree Deakins law firm, global tech giant Capgemini, and Founders Federal Credit Union. Bone-In Barbeque restaurant is located in the historic Ensor Building, and work is underway on the 196-unit Merrill Gardens senior living community as well as 28 residential townhomes at TownPark at BullStreet, adjacent to the S.C. Dept. of Natural Resources’ Parker Annex Archaeology Center, a historic renovation. The award-winning historic Bakery at BullStreet building is home to the SOCO cowork and event space, the hub of the BullStreet Technology Village. The Central Energy Facility is the future home of Downtown Church, and plans are underway for a new USC Health Sciences campus. A 20-acre public park with a dog park, trails, and pond is under construction, restoring 2,000 feet of natural habitat along Smith Branch Creek, helping to mitigate flooding downstream. BullStreet contains 125,000+ square feet of commercial/office and retail space and is zoned for up to 3.3 million square feet of commercial use and 3,553 residential units. Follow @BullStreetSC and #BullStreetSC on Twitter, Instagram and Facebook, and learn more at https://bullstreetsc.com.